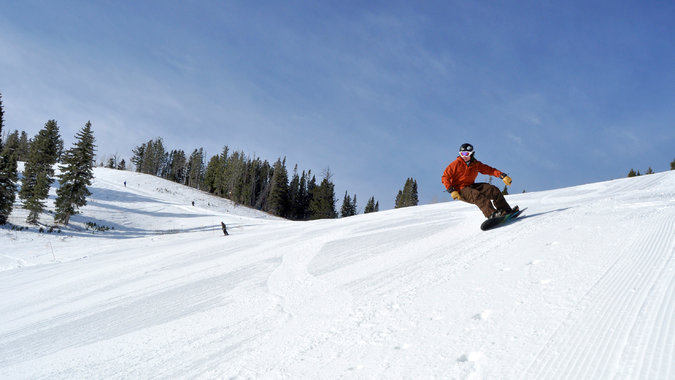 A snowboarder at Solitude Mountain Resort, one of seven resorts in the Wasatch Mountains above Salt Lake City, Utah, that would be included in the OneWasatch megaresort. Credit Brian Thurber/Associated Press

Perhaps the biggest news lately in North American skiing has been the announcement in 2014 that seven ski resorts perched high above Salt Lake City hope to join hands to create the largest megaresort in North America. OneWasatch, as it’s being billed, would be a colossus, with one ski pass linking more than 100 lifts across Utah’s Wasatch Mountains, more than double the acreage of Whistler-Blackcomb in Canada, currently the continent’s largest ski resort. Its backers say OneWasatch would offer an experience akin to Europe’s linked valley-to-valley ski systems like Arlberg in Austria or Trois Vallées in France.

The idea is ambitious. It’s sexy. It’s also hugely controversial. Opponents say linking the resorts isn’t right for the mountains, or for the people who play in them or who rely on them.

Most of the ski resorts that operate in the meringue of mountains above Salt Lake City are so tightly clustered that only a ridgeline separates some of them; others are already joined. Adding as few as five more chairlifts could create a vast, interconnected ski world. (Park City Mountain Resort and Deer Valley Resort already sit shoulder-to-shoulder, so they would simply need to drop a boundary rope.)

The vision of weaving together the resorts has been kicked around for half a century. But the idea now has more momentum than ever: In the last few months, Deer Valley’s owner bought Solitude Mountain Resort, across the mountains, and Colorado’s Vail Resorts bought Park City Mountain Resort after a long and nasty legal dispute. (Vail Resorts already runs Park City’s neighbor, Canyons Resort, for another owner, and has announced it will install a gondola lift between the two for next winter.) Supporters of OneWasatch say all seven resorts could be linked for roughly $30 million in private money.

Why do it? “It’s a huge marketing draw,” said Nathan Rafferty, president and chief executive of Ski Utah, which markets the state’s ski resorts. “It would simply create a ski experience in Utah that no one else in North American has, or could have.”

Utah’s resorts are ready for their next boost. The state’s ski industry got a lift in the years after the 2002 Winter Olympics in Salt Lake City. Last year the state saw 4.2 million skier-visits, up from about 3 million at the time of the Olympics. That growth has started to plateau, however. The resorts, and nearby Salt Lake City, frequently have empty beds in winter, Mr. Rafferty pointed out. And the ski areas want something that sets them apart from competition like Jackson Hole, Wyo., and Vail, Colo. An interconnect “is the next big bump” that could propel business to 5 million skier-visits per winter, Mr. Rafferty said.

But opponents say the idea, though beguiling, falls apart upon closer inspection, for several reasons.

Among them is water. The high central Wasatch are this region’s water tower. Nearly 500,000 people in the Salt Lake Valley rely to some extent on melting snow that drains from the mountains. As a result, the Wasatch, though intensely used, are also intensely regulated. Dogs aren’t even allowed in some popular canyons.

A fine balance has been struck, which has protected water quality while continuing to permit recreational use, said Laura Briefer, water resources manager for the Salt Lake City Department of Public Utilities. But that balance is increasingly precarious, especially with the double threat of climate change and population growth, which is expected to increase by 46 percent in Salt Lake County by 2040.

The problem with OneWasatch is that a ski lift is never just a ski lift, Ms. Briefer said. Ski lifts mean new outbuildings, new access roads and felled trees. Such changes erode the water quality, and quantity, for people downstream who basically live in a desert.

While OneWasatch’s backers say their plan has no development attached to it, water officials and others argue that construction will inevitably follow the chairlifts. Ski lifts “are the camel’s nose under the tent,” Jeff Niermeyer, the director of the Salt Lake City Department of Public Utilities, told this reporter two years ago when speaking about SkiLink, another controversial ski-connection proposal that has been shelved. Similar concerns apply to OneWasatch, Mr. Niermeyer said this month: “It still has the potential to draw a bunch of development into these canyons,” adding, “I am not willing to trade watershed protection for ‘wow’ factor.”

Other opponents worry about elbow room. Nearly 80 percent of Utah’s population lives at the feet of the Wasatch. The Uinta-Wasatch-Cache National Forest, which includes much of this high country, is one of the five most-visited national forests in the country. Millions play in the same postage stamp of mountains above Salt Lake City, a roughly 10-square-mile patch of crimped topography that includes those seven ski resorts. Backcountry skiers long ago named their beloved, crowded playground “WasAngeles.”

Jamie Kent, a real estate broker and president of the volunteer Wasatch Backcountry Alliance, said, “We’ve got it all: world-class lift-skiing, world-class backcountry skiing, world-class heli-skiing — and it’s all happening in this very small area, above 7,000 feet.” A tentative, hard-won detente has been struck among the user groups, Mr. Kent said. Now the ski areas want a larger piece of a pie that’s already completely spoken for, he said.

Residents have repeatedly said they love their ski resorts but don’t want them to grow. In a study conducted in 2009 and 2010 as part of work on the future of the most popular mountain canyons, nearly all Utah residents interviewed said they did not want resorts to expand beyond their existing boundaries. The long-range plan for the Uinta-Wasatch-Cache National Forest calls for no such expansion.

While the new lifts would mostly be built on private land, the repercussions of these lifts would ripple far beyond that, Mr. Kent said. The biggest trend in skiing right now is “sidecountry” skiing — riding the chairlifts but then heading out beyond the groomed runs for a more adventurous experience. One proposed lift in the Grizzly Gulch area at Alta Ski Resort that would likely require some public land is particularly controversial. It would “wipe out many hundreds of acres of prime backcountry terrain, plus turn much of the central Wasatch into resort sidecountry,” a well-known local skier, Andrew McLean, wrote in an email.

Mr. Kent said his group understands that many of these lifts are being proposed for ski resorts’ private property. “But we also recognize that they operate largely on public land,” he added, explaining that these mountains are a patchwork of public and private ownership. “To quote the group Save our Canyons,” which focuses on protecting the Wasatch canyons, “ ‘It’s a public-private partnership. And partnerships balance out.”

There’s also disagreement about whether linking the ski resorts will make for, well, fun skiing. Mr. Rafferty of Ski Utah said that many visitors would use the interconnected resorts to move across the landscape in “more of an adventure style of skiing.” It will take a skier six chairlift rides, and two hours’ travel time, to ski between Snowbird, to the west, and Park City on the range’s east side. On blogs and in conversations, however, skiers have questioned whether anyone other than tourists would want to do that. After all, skiing from Park City to Snowbird is hardly the same as, say, skiing from a cup of coffee in Swiss Zermatt to a grappa in Italy’s Cervinia, with the Matterhorn always over your shoulder.

Why is Utah so interested in becoming someplace else, anyway? said Peter Metcalf, founder and chief executive of the outdoor gear maker Black Diamond Equipment, which is based in Salt Lake City. Mr. Metcalf noted that when he had asked Europeans why they come here, they looked at the wild peaks still untinseled by ski lifts and replied, “Because we don’t have this.”

No final decision has been made on linking the ski resorts. The proposal recently has been folded into the Mountain Accord, an effort involving many stakeholders including Mr. Metcalf, to hammer out a guiding plan for these mountains, including recreation and transportation.

In the meantime, the debate continues.