With the addition of just a few connecting lifts, the dream of turning seven Utah resorts into the largest contiguous ski experience in North America could easily become a ONE Wasatch reality.

The Wasatch Mountains are grand, iconic and drenched in a rich abundance of snow. They are also geographically compact, allowing seven Utah resorts to coexist as literal neighbors, often separated by just a single ridge—some by just a rope line. As a result of this unique proximity, an obvious question arises: What if you could ski between the seven resorts, and do so on one pass? What if?

Alta/Snowbird and Brighton/Solitude have enjoyed successful, mutually beneficial connections for years. Deer Valley and Park City could connect with the simple drop of a rope line.

Just a few short years from now, Utah’s corner of the mountain sports world offer the same great skiing but with even better access and more options. ONE Wasatch envisions a four-season resort mountain playground that borrows the best efficiencies from decades-old European transportation ideas, incorporated in a Utah tradition of conservation and sustainability.

In less than a decade Salt Lake City will have a new international airport, which is just now beginning to take shape. Utah is also developing a modern and dynamic transportation hub with rail lines linking communities up and down the Wasatch Front. In a perfect world those urban rail lines would connect with a mountain transit system to efficiently deliver skiers, hikers, bikers and recreationists of all types and abilities into a high alpine natural wonderland.

True connectivity would combine two separate and distinct concepts: an over-the-snow, inter-resort ski connection, utilizing gates similar to those currently connecting Alta/Snowbird and Brighton/Solitude, that would allow skiers of varying abilities to glide between resorts using gravity and chairlifts; and an efficient, environmentally sensitive and safe mountain transportation solution moving people between valley metro areas and the mountains. The goal is simple: more time on the snow and less time, and cars, on the road. All told, a ONE Wasatch experience would encompass more than 18,000 skiable acres and 100-plus lifts. And with technology available today, it could all be available with one lift ticket.

Indeed, a group of Utah transportation officials, local governments, recreation user groups and ski area operators are collaborating now on a process called Mountain Accord, an initiative which may ultimately yield a mountain transportation system to augment or even replace the current system of ski buses that now link to the Utah TRAX (light rail) system. As more and more skiers and snowboarders discover Utah’s resorts, metro to mountain mass transit options will play a critical role in ensuring that the Wasatch Mountains remain as pristine as they are today while being enjoyed by many.

Utah’s ski industry sees ONE Wasatch as a series of logical steps that, when complete, will make available an entirely new ski and snowboard experience to Utah. Imagine waking up at Snowbird and ending your day at Deer Valley, visiting seven resorts along the way and getting the full scope of Utah’s unique geography and varied resort cultures. It’s a concept fully supported by all of the ski areas in the central Wasatch and is possible only here in Utah, home of The Greatest Snow on Earth. 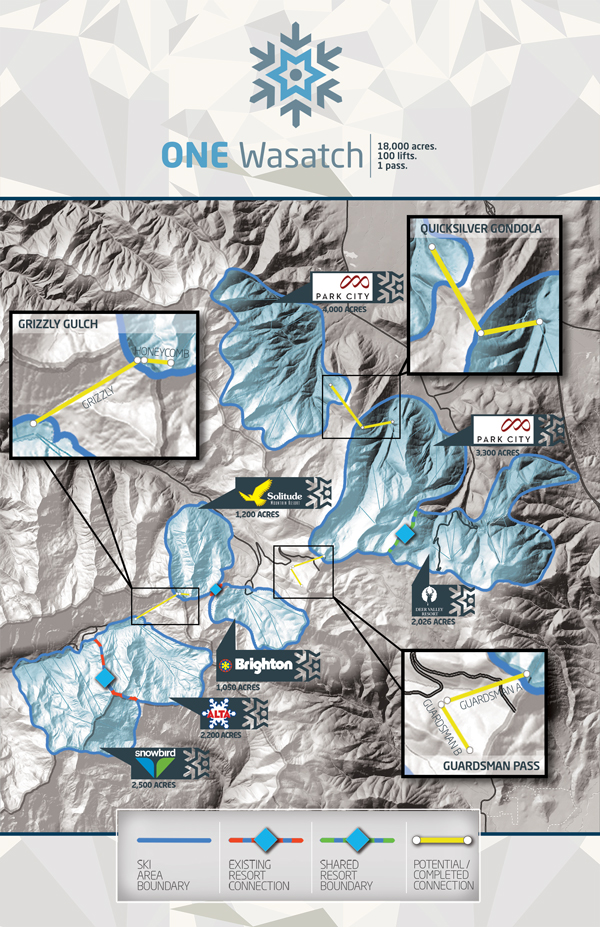